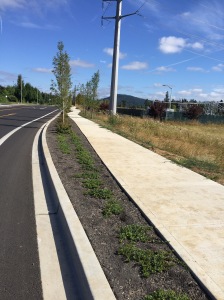 Summer 2015 I stretched myself a bit on the social front and decided to go on a group ride. The Vancouver Bicycle Club is a great organization and I often see groups out and about while I’m commuting to and from work. This was my summer to seize the moment and give it a whirl. I checked out the site and found the Tuesday Friend ride was a good fit. A nice place to start. Clay is the leader.  I didn’t know what to expect. Group riding is the place to learn how to riding with others. You are in a situation where you need to point out road’s infinite imperfections to the riders behind you. Plus you signal left and right and call out “Car back” and help your fellow riders pay attention. It’s a nice change of pace and you get to socialize. Plus, someone else drives and you fall in behind. Also a fantastic way to learn new routes.

My first group ride with VBC was about 10 riders strong and I was one of three women. I found this surprising. Exciting that other women were present, but they didn’t socialize much with me. They were friends, so they talked with one another.  Once of the women was new to cycling. She bought a bike about a year ago and she was going on her first 40 mile ride on the upcoming Saturday. She was extremely nervous about it. The men were telling her how to eat and when to drink. The common advice about drinking before you’re thirsty and eat before you’re hungry. They talked about energy bars and goos.

I had forgotten the tendency cyclists have to bloviate and brag about rides of yore. My sage advice was simply to ride as your own pace. If the ride isn’t a competition, then dial it back and enjoy the day. You have to decide when you want to push it and when you need to pull back. I waxed on about a Seattle to Portland ride of some years gone by when I tried to ride in a group that was going about 18 mph. I was holding my own for 25 minutes and then I bonked. Bonked big!  I waved them on and I pulled over. I staggered to a stop and sat down with my bike on my knees. Everything got black. My eyes were open and I could not see. It was 90 degree out and I was shivering.  I stuck my head between my knees and ate a Power Bar while hearing a chorus of people ask me if I was okay. I thought I was going to die. As my vision returned and I guzzled the water I realized I suffered a classic bonk. I learned a valuable lesson that hot July day about hydration and energy. Not everyone’s pace is the same. You have to take care of yourself and know your limits.

“You did the STP?” A member asked. “We probably saw one another. Back in the day when that ride was only 4000 riders.” We swapped food suggestions. Listening to the banter reminded me on a big family reunion where everyone remembers something. “Those red potatoes. Boil those up with a little salt. That’s better than an energy bar.” Another suggested.

Three summer rides with the guys and a few gals of the VBC and I’m hooked. Group rides, especially with the right group, are highly recommended. Group rides remind you that you’re not alone out there; strength in numbers when you’re out on the main roads and navigating the backroads. There’s a sense of camaraderie and friendship even if you just met everyone. Someone has your back and there’s an energy that helps you keep up and motivates you to ride strong. As is often the case with me, I overdo it. I wanted to try the other weekly rides, like the Earthquake ride, but instead I became a card carrying member and stick to the friendly Tuesday ride. I couldn’t go with them today. I took off earlier and did the route but without the group. How odd it was! I got a few things wrong in the route and I missed Tony, Dave and Steve, plus there’s a guy who smokes a pipe as a rest stop. At first I was slightly shocked by this and now it doesn’t faze me.

Not every group will be the right fit. Nor will every ride. But you should try. When it’s good, it’s great and you make friends and learn about life outside your bubble.

When you miss the group, that’s when you know a group ride is working for you.