It has been at least five years since I’ve had a mountain bike in the fleet. I didn’t really notice until a snow storm we had in early January. I took my Kona Roundabout out for a ride and I didn’t get very far. The snow packed up in the fenders and I didn’t make it to the grocery store which is only a 15 minute ride from the house. Removing the fenders is not an option since my Kona is my commuter bike and we don’t get enough snow to justify being without fenders. It was one of those unusual storms and the snow was gone in a few days. However…it made me long for a bike that would be up to the challenge of inclement weather.

We could have starved, or worse, the zombie apocalypse could have left us stranded in the house with no way to escape. I started thinking maybe it was time to look around at a fat tire or a mountain bike. For safety, of course!

I started with a test ride of a Cannonade and a BMC. 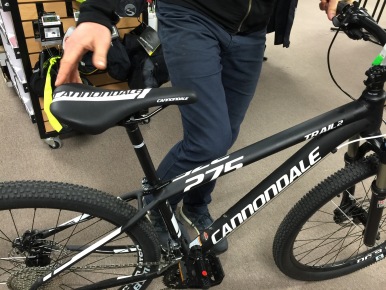 What do I want in the mountain/fatty bike? How about simplicity. The bike salesperson was telling me about the RockShox and frankly that was one of the reasons I didn’t keep the Gary Fisher Tasajara in the first place. I didn’t want to go over $1500 and I wanted something that was a mix of a fatty and a mountain bike. Did what I what even exist? I wasn’t overly impressed with the first two.

Both of these bikes were fine, but I wasn’t wowed! The bike lust feeling didn’t assault me and neither of the bikes made a lasting impression. I decided to walk away and think about it another time.

The clock struck another time last weekend. I had the Kona in the bike shop for a cable issue and I asked the guy, Tobin, who always tries to sell me something… because I ask what I need and he leads me around the shop with the smell of fresh rubber tires dominating my olfactory senses like some sort of bike musk. I gave him my wish list. He showed me a few things but I came clean and said I also wanted the bike to be pretty. I would even pay a couple hundred for something that would turn heads in addition to being a fatty/mountain-esque bike.

Tobin listened to something I said when I talked about the suspension and decided to steer me in the direction of no suspension but fat tires. I could see him take it like a challenge.

“I have another idea,” he added.

Then he walked to the desk and did a little snooping on the computer.

Great combo of a fatty and a mountain bike. Mint color.

Today, I took this stunner for a test ride which felt like 15 minutes, but apparently was closer to 30. “I thought maybe something happened to you!” Tobin said. Seriously, time stops when I’m on a bike. Especially the right bike. There’s nothing at all wrong with this bike. It handles like an extension of your body. It flies up or down anything… streets, curbs (yes, I tried one) even trees! I didn’t try climbing a tree with it, but the gearing is amazing. High is hard and low is granny. The Trek Stache 5 wants dirt and potholes for snacks. The 29+ makes you feel like you could tree a cougar. The only thing I don’t like is that you can’t really go bike packing with it because you can’t add a rack, but whatever. That’s minor. You could add something to the seat post if you wanted. I did that with the Gary Fisher.

I’m smitten. It’s likely I will visit it tomorrow for another little spin around the block.

Shall I compare thee to any other bikes of similarity? Wait, that wasn’t the poem, but I am wondering how to compare this bike to another bike of its kind when in fact this is an unusual bike. If you have any ideas please tell me in the comments.

Did I mention it’s on sale? Yeah, the price is good and that’s a bonus too.