The fog of the last six weeks is lifting. Now is the time when people start asking, “So how has your summer been? Did you do anything exciting?” I always cringe because I don’t tend to do what I think I’m going to do. I don’t want to get into the contest of who had the most impressive summer. I just want to say that there were some hit and some misses.

At the end of the school year I was hit hard with a wretched cold. All year I managed to dodge the gazillion germs passing from the 900 kids in my middle school, but then in June with only two weeks left in the year, my defenses were down and I knew something was coming to get me. I didn’t get the attendance award and in the final stretch I missed three days of school and over a week of my daily bike commute. I haven’t been hit that hard by a cold in a long time. Antibiotics were involved and despite the research, people who workout regularly still get flattened by colds.

It took me awhile to recover from the cold and then from the school year. I had family visiting from Chicago and we did a lot of touristy things. While I managed to ease back into riding during their visit I felt I was missing out. In retrospect, it was good. Because they were here I wasn’t going to overdo my rides. Again, the miss became a hit. Blessing in disguise as they say.

July, however, I was ready to go and go more. I did too. I took off one day on my road bike and I did 38 miles and I felt great until I pulled something. I didn’t know until the next day but something behind my knee just didn’t want to do anything except throb and ache. Ugh! Lost a few days trying to recover. Plus, I had to pull back on the reigns since I took on a big project for my dad’s 80th birthday.  My father is my hero and he’s the best man I know. He’s smart and entertaining and I know I get my spirit of adventure from him. His birthday was July 30th and since I enjoy video editing, I made him a video. It was a big deal and we had an awesome party for him. My July biking routine can best be described as restrained. Often July is the month when I really rack up the miles. However, July 2016 was more about the video. It feels like it was a miss on bike riding, but it was probably more of a hit since it was less of a strain on my body. Since I’d go out for an hour or two instead of half the day, I was more deliberate about where I was going and what I was doing.

Since the party was last weekend, I’ve been back in the saddle. Last week I went out on some trail riding. I got off my bike and went into the grass to get this amazing shot of my bike in a grove of trees and something in the grass, I think a spider, mistook me for a fly and bit me. At first I thought a needle was shot into my ankle by a sniper. Freaking thing took me down. Of course, it had to eat and run so I couldn’t find the thing to kill it. My ankle merely looks like a giant red patch is attached to it. Stupid. That has never happened. Definite miss.

The weather for July was a serious hit. Usually July in the Portland/Vancouver area is hot, hot and more hot. Starting on the 5th of July, you have to get out early in the morning to get in a decent ride before you’re melting into your bike. Mornings would start out cloudy and overcast and by 2 p.m. you’d see the sun breakthrough. The weather was a definite hit. 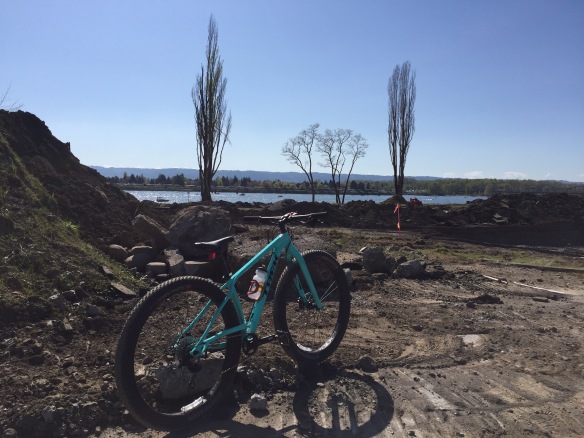 Bike rides to unexplored areas is part of the joy during the summer. My summer has had some unmapped, unexplored events: from guests to injuries to spider bites, it’s always something. Many events have turned out better that I thought. Also some unscripted, unplanned moments which leave you shaking your head about more than just politics. Summer 2016 was both a hit and a bit of a miss here and there. A month from now when I back to my routine and I’m too exhausted to write a word much less a paragraph, I’ll remember that this summer had its own set of ups and downs, just like the other seasons. August is here and my schedule is clear. I’m strong and ready to roll. I’ll make what is left a brilliant success.