Last Monday we packed up our car and headed to the coast. We’re only about 90 minutes away from the coastal town of Astoria. It’s named for American investor John Jacob Astor. It’s a small, gritty town that has a great Riverwalk and some amazing sights and sounds.

View from the Lighthouse boat called The Columbia.

Spring break is a time to put on the brakes and take some time out and maybe even away. I don’t always get out of town. Spring break has a way of sneaking up on me every year and I neglect to make plans. This year I started early and I knew we could do something by either heading North to Seattle or South to the coast. My husband enjoys everything near or on the water, and I just wanted a change of scenery. Astoria became our destination. We started our stay with a bike ride along the Riverwalk.

Max in his basket on my bike. View of Astoria-Megler Bridge built in 1966.

The Riverwalk is about 5 miles total and hugs the banks of the Columbia River. It’s spectacular and was the highlight of the trip for me. I could have gone back and forth a million times and seen something new each time. Between the creaking docks and the choking sounds of the seal lions it was rich and entertaining.

Here’s the amazing thing about the Riverwalk—It was a Burlington Northern Railroad and built back in the 1890s when Astoria was a real industrial town, and railroads are only built on flat land, and the only flat land in Astoria hugs is right along the mighty Columbia River. I love Rails-to-Trails stories but this one is even better since the placement of the railroad helped preserve the Riverwalk for today’s use. Bonus! 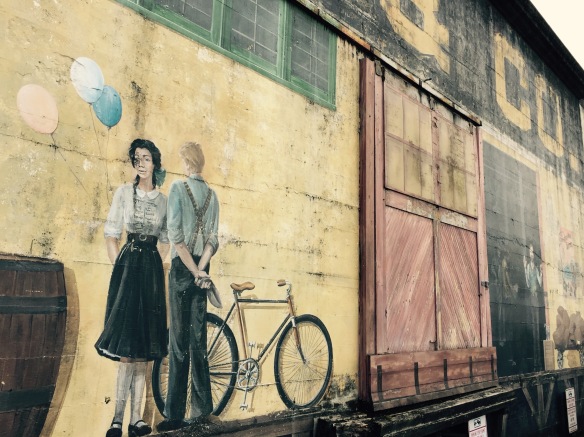 A fitting picture on the Riverwalk. 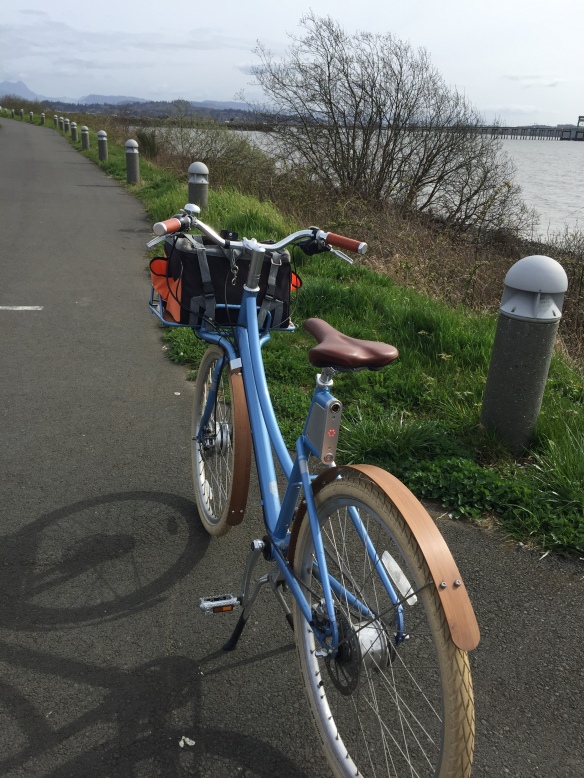 The end of the road. Bike ready to head back.

I’m grateful we had Monday because Tuesday was reserved for exploring Fort Stevens and Fort Canby and then Wednesday we visited the Maritime Museum and Fort Clatsop. Plus the weather decided to have a temper tantrum and wind and rain made bike riding dangerous.

I consider spring break a time to put on the brakes and relax. My Riverwalk bike ride is added to my list of happy places. Such a lovely few hours to remind me that I live in one of the most exquisite parts of the world. Another view of the same might river came on Thursday when I took my Kona for a spin.

Go down, down, down the hill and through the Safeway parking lot to the Riverwalk.

Different section of the river.

Clouds in the river.

Seeing the Columbia from Astoria as it spills into the Pacific Ocean gave me a renewed appreciation for something I see everyday and take for granted.

Maybe that’s why we all need to put the brakes on our day to day routines and look around at the beauty all around.

Be safe our there!
Bike Goddess

2 thoughts on “Braking for Spring”