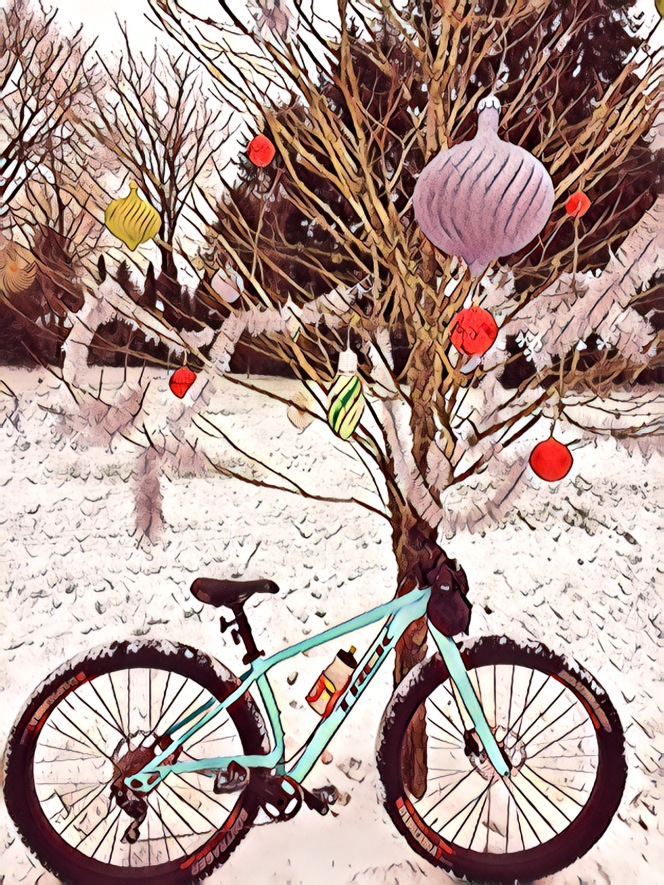 Merry Christmas! There is something magical about snow on Christmas Eve. It’s a child’s dream to see a blanket of white. Everything gets quiet and soft except for the sound of fat tires eating up the powder and making tracks. In truth I lasted only 1.3  miles of neighborhood riding, but still it was an epic ride. A few people in cars giving me sideways glances as if I am “that crazy neighbor” who bikes places they wouldn’t drive to. That’s okay! I love the sound of the tires compacting the snow and moving like a beast on the surface. Awesome!

It’s rare to have snow right now, making it even more special. In 2017, January was the month I rode the least. I got a Wahoo and set it up in the basement. I learned I like being outdoors so I didn’t use it much after January but this year I am going to use it at least once a week for distance and speed. Foreshadowing of some resolutions. Commuting is going well, but the weather does put a damper on the day when you’d like to just have a good workout. A sweat fest of spinning. I did ride more miles in 2017.

January my time was only in the teens. We had record snowfall and school closures pushed the end of the year to June 26th. Longer rides and more miles in the summer months, but October was spectacular too!

I’ve never been the rabbit in the story of the Tortoise and the Hare. Even as a child when I would hear the story, I thought that the tortoise had the best pace. Slow and steady, but that doesn’t mean I don’t like speed. I do! But I don’t want to get injured or break something in the process which could sideline me for months. I’m the tortoise; cautious and slow. I don’t ride to keep up, I ride to set my own pace.

Before 2017 I used mass transit every morning to get to within 5 miles of my work. Then I’d ride. Now, I go the distance and ride in the morning and afternoon. That amounts to 20+ miles per day of commuting. I know some people do more, or less, but this is just right for me. When the weather is cooperative, I’ll add more to the ride home.

Santa was on track with me this year. I love my slippers! The Wahoo Elemnt is going to be great. I plan to use it today on an indoor ride. Can you do that? I paired it with everything and I’m excited to give it a whirl, but remember that snow I talked about earlier? It’s iced up quite a bit and I’d like to play it safe and spin up a sweat inside. There are cookies in my future today.

Adding to the blog more often and planning out my posts was another goal this year. It has helped immeasurably to hear from you.

Readers, I wish you the best today and everyday! Thank you for following this blog and sharing your adventures and interests. Glad ridings to us, everyone!

As we wrap up another Christmas, I can’t help but wonder what’s ahead. You know what it’s like when you’re on a road and you can’t quite see as the road bends and yet you keep pedaling onward. Forward. 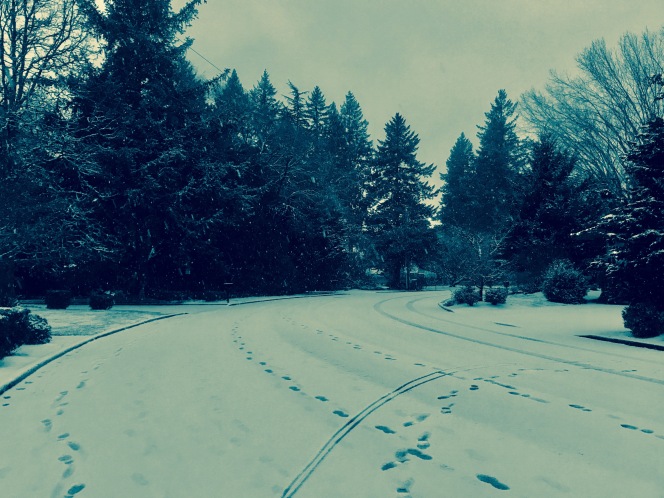 Last year I joined Strava. I like tracking my rides because the data is illuminating. I had been using MapMyRide, but it seemed like most of my friends were on Strava and they loved it. Peer pressure took over. All the cool kids were using Strava and I wanted to be one of them. I tried the free account for a few months and then went Premium at the tail end of 2014.

Why bother? Two reasons: motivation and data. In 2015, I started the year with ride #1 and ended with ride #303. The data says I completed more than 303 rides, but that’s what I named them. There were rides that were not numbered, but that’s fine. You can choose your own system. I decided to start 2016 the same way; ride #1 was today.

Also, when you see how many miles you ride every week, month and year, you see your progress as a rider. Essentially, you compete against yourself. Either app (and I’m sure there are others) provide features that keep you riding. You can determine your weekly mileage goals or annual totals. Plus there’s a community of riders out there who have your back. I love it when another rider gives me kudos on a ride.  Also, I enjoy seeing their routes. I wish I knew more about all its intricacies and I’d love to have a manual to explore some of the features, but most of what I’ve learned in the last year has been by experimenting or looking up stuff online. For example, the graphic above is an annual summary provided by another app or extension I found here, and it uses the Strava data.

My goals for 2016 are to keep riding and recording my rides. I’m not sure about my total mileage yet. I’m setting the bar for 4000 miles. My Kona Roundabout gets the most use use since it’s my commuter bike. I have Luna, a Cannonade Synapse road bike which is a fair weather bike. No fenders, just speed. There’s the Trek Portland and it was my commuter up until 2012. I don’t ride the Trek much and I’m considering selling, but it’s a good backup bike.

I love bikes and I love riding. Your gear can be your kit, clothing, shoes, your bike, bags and tools but one tool in particular that allows you to quantify your riding. I use Strava for everything, even walking my dog Max. It’s a new year and it might be time to explore a tool to help you track your rides.

Strava is not paying me to sell you on the idea although this post does sound like a pitch. I was dubious about making the move from MapMyRide to Strava and now I can’t imagine a simple ride without Strava. When I travel I try to rent a bike or use a city’s bike share and tracking my rides is becoming a sort of keepsake for me. It’s a great way to share your
adventures and remember your routes.

Thanks for reading. Have a great day and get out there and ride!

Cycling to work & back, to the shops....anytime that I can use my bike instead of the car.Sometimes I even get on it just for fun & fresh air!

ride your heart out. washington d.c.